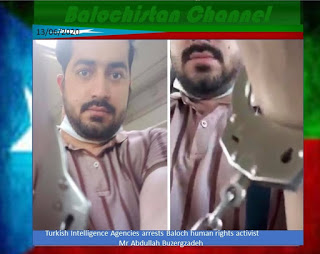 According to details, MIT has raided Mr Abdullah Bozrogzadeh’s residence in Ankara in the early hours of Thursday morning and arrested him.

The activist has managed to record a short video clip and shared it with friends while he was being taken by the Turkish forces.

The video showed young Baloch activists in handcuffs and saying, “I’m Abdullah Bozrogzadeh. I am in custody of Turkish security agencies. Today is June 11.”

An activist of Baloch Activists Campaign (BAC) informed Balochwarna News that Mr Bozorgzadeh was told by the Turkish intelligence service that he residence permit was expired. “The Intelligence service has nothing to do with resident permits. It’s immigration’s job.”

He further said that Turkey has already arrested and handed over many Ahwazi Arab activists to Iran and fear that the same could happen to Abdullah if timely action is not taken to urge Turkey not to deport him.

It is worth mentioning that Abdullah Bozorgzadeh, the younger brother of Habibullah Sarbazi, was arrested in on July 11, 2018, along with six other Baloch youth for protesting the gang rape of 41 young Baloch girls over a period of few months with Iranian state-backed influential personalities in Geh (Iranshahr) city of Iranian Occupied Balochistan (IOB).

BalochWarna News could not confirm the fate of other youths whether they were released later or they are still languishing in the custody of Iranian forces.

Mr Bozorgzadeh was sentenced to 11 years of imprisonment for allegedly ‘giving information to foreign media’. However, he was later granted bail and freed. After gaining his liberty, Mr Bozorgzadeh fled to Turkey and has been living in Ankara since his arrest on June 11.

Habibullah Sarbazi, an active human and political activist reporting the brutal Iranian forces treatment of Baloch people under the Persian colonial rule, expressed concerns that his Abdullah could be deported as he has been transferred to the deportation centre in Ankara.

“His deportation of Iran will pose a direct threat to his life and we request the international human rights organisations to help us stop his deportation,” Mr Sarbazi tweeted.

Meanwhile, the International Voice for Baloch Missing Persons (IVBMP) and Baloch political activists leaving in the diaspora also expressed their concerns and requested Amnesty International, UN and other Humanitarian organisations to play their role in preventing Mr Bozorgzadeh’s deportation to Iran.