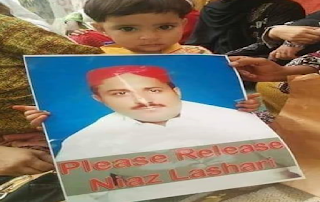 on 16 June 2020, tortured and bullet riddled body thrown in front of Jinah Hospital in Karachi has been identified as of missing political worker, Niaz Lashari. Niaz Lashari remained associated with Sindhi national movement for more than two decades. He was a member of the National Congress of now banned Jeay Sindh Qaumi Mahaz – Arisar (JSQM-A). He was first abducted by the state agencies in April 2018 from Karachi, where he was residing, and was later on produced in September 2018. He was again abducted returning from his hearing in a so called Anti Terrorism Court (ATC) in April 2019.

World Sindhi Congress (WSC) is deeply saddened and strongly condemns the extra-judicial murder of Niaz Lashari. Pakistani state is on a rampage of committing gross violations of human rights of Sindhi people including enforced disappearances and extra-judicial killings of Sindhi political, civil society and human rights workers. WSC will raise this issue with the UN and other relevant forums to request them to save Sindhi people from these atrocities.