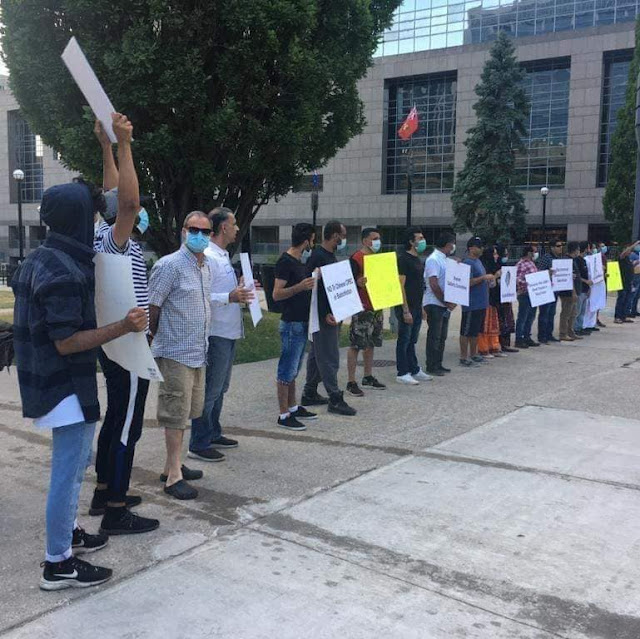 The protest was held under the aegis of Bramsh Solidarity Committee to express anger at the murders of women and children in Balochistan.

The protesters condemned the senseless killings of two Baloch women by the Pakistan Army death squads, in which a 4-year-old girl, Bramsh was wounded by a stray bullet.

27-year-old Maliknaz, mother of Bramsh fiercely resisted the armed attackers to save her daughter but was killed after several shots were fired at her inside the house.

Another Baloch woman, Kulsoom, was also murdered inside her house a week later. The rally was attended by representatives of the Kurdish, Yemeni and Hindu communities who expressed their solidarity with the people of Balochistan.

Zafar Baloch, a Baloch Human Rights Activist based in Canada said, “Baloch people are fighting against the Pakistan Army and against the People’s Liberation Army (PLA) of China and in which the decisions are made in Islamabad and GHQ, Rawalpindi where the army headquarters are, and also by Communist Party of China. They are equally criminal partners in Pakistan’s slaughter and atrocities taken place in Balochistan”.

Karima Baloch, Ex-chairperson of Baloch Students Organisation (Azad), who is living in exile in Canada said, “Pakistan is the main perpetrator behind all thefts and killings. The army, who is running death squads and also the Frontier Corps (FC) and Anti-Terrorism Squad, is behind the killings and human rights violations in Balochistan”.

Protesters also expressed their anger at the Chinese China-Pakistan Economic Corridor (CPEC) projects and control over the sea port of Gwadar that has become the major reason for the China-backed Pakistani military operations in Balochistan resulting in the death of thousands of Baloch civilians.