Panjgur: We accept responsibility for the Killing of a key member of the state death Squad named Shoaib. BRA 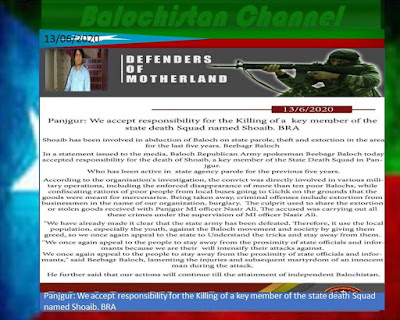 Panjgur: We accept responsibility for the Killing of a key member of the state death Squad named Shoaib. BRA

Shoaib has been involved in abduction of Baloch on state parole, theft and extortion in the area for the last five years. Beebagr Baloch

In a statement issued to the media, Baloch Republican Army spokesman Beebagr Baloch today accepted responsibility for the death of Shoaib, a key member of the State Death Squad in Panjgur.
Who has been active in state agency parole for the previous five years.

According to the organisation's investigation, the convict was directly involved in various military operations, including the enforced disappearance of more than ten poor Balochs, while confiscating rations of poor people from local buses going to Gichk on the grounds that the goods were meant for mercenaries. Being taken away, criminal offenses include extortion from businessmen in the name of our organization, burglary. The culprit used to share the extortion or stolen goods received with Panjgur MI officer Nasir Ali. The accused was carrying out all these crimes under the supervision of MI officer Nasir Ali.

"We have already made it clear that the state army has been defeated. Therefore, it use the local population, especially the youth, against the Baloch movement and society by giving them greed, so we once again appeal to the state to Understand the tricks and stay away from them.

"We once again appeal to the people to stay away from the proximity of state officials and informants because we are their will intensify their attacks against.

We once again appeal to the people to stay away from the proximity of state officials and informants," said Beebagr Baloch, lamenting the injuries and subsequent martyrdom of an innocent man during the attack.

He further said that our actions will continue till the attainment of independent Balochistan. 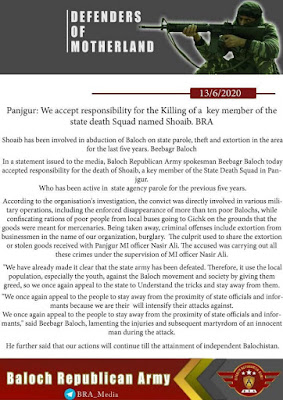