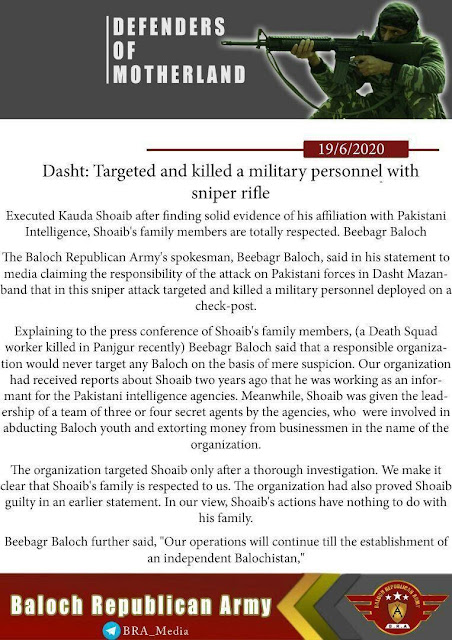 The Baloch Republican Army's spokesman, Beebagr Baloch, said in his statement to media claiming the responsibility of the attack on Pakistani forces in Dasht Mazanband that in this sniper attack targeted and killed a military personnel deployed on a check-post.
Explaining to the press conference of Shoaib's family members, (a Death Squad worker killed in Panjgur recently) Beebagr Baloch said that a responsible organization would never target any Baloch on the basis of mere suspicion. Our organization had received reports about Shoaib two years ago that he was working as an informant for the Pakistani intelligence agencies. Meanwhile, Shoaib was given the leadership of a team of three or four secret agents by the agencies, who  were involved in abducting Baloch youth and extorting money from businessmen in the name of the organization.
The organization targeted Shoaib only after a thorough investigation. We make it clear that Shoaib's family is respected to us. The organization had also proved Shoaib guilty in an earlier statement. In our view, Shoaib's actions have nothing to do with his family.
Beebagr Baloch further said, "Our operations will continue till the establishment of an independent Balochistan,"
Balochistan BRA