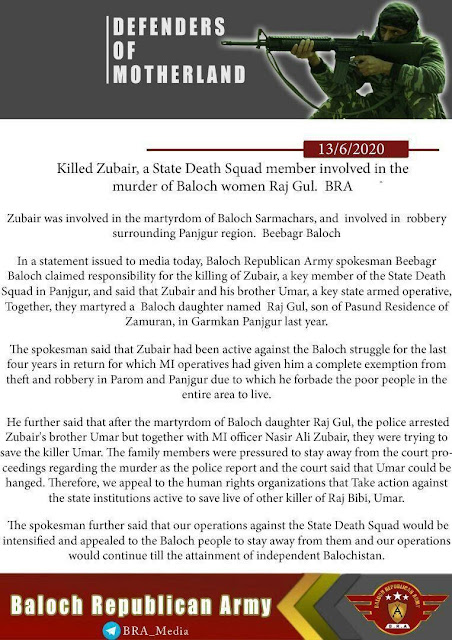 Zubair was involved in the martyrdom of Baloch Sarmachars, and  involved in  robbery surrounding Panjgur region.  Beebagr Baloch
In a statement issued to media today, Baloch Republican Army spokesman Beebagr Baloch claimed responsibility for the killing of Zubair, a key member of the State Death Squad in Panjgur, and said that Zubair and his brother Umar, a key state armed operative,  Together, they martyred a  Baloch daughter named  Raj Gul, son of Pasund Residence of Zamuran, in Garmkan Panjgur last year.
The spokesman said that Zubair had been active against the Baloch struggle for the last four years in return for which MI operatives had given him a complete exemption from theft and robbery in Parom and Panjgur due to which he forbade the poor people in the entire area to live.
He further said that after the martyrdom of Baloch daughter Raj Gul, the police arrested Zubair's brother Umar but together with MI officer Nasir Ali Zubair, they were trying to save the killer Umar. The family members were pressured to stay away from the court proceedings regarding the murder as the police report and the court said that Umar could be hanged. Therefore, we appeal to the human rights organizations that Take action against the state institutions active to save live of other killer of Raj Bibi, Umar.
The spokesman further said that our operations against the State Death Squad would be intensified and appealed to the Baloch people to stay away from them and our operations would continue till the attainment of independent Balochistan.
Balochistan BRA