49th Foundation Day Of BSO Why Politics is Necessary for Students? 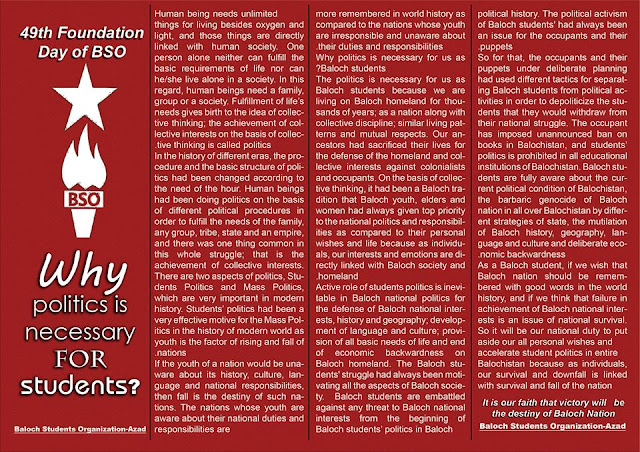 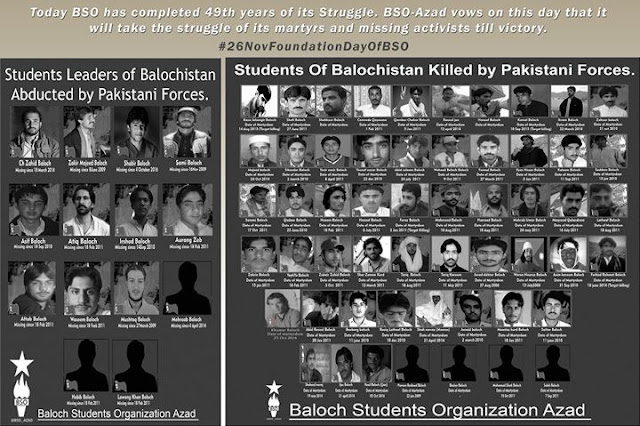 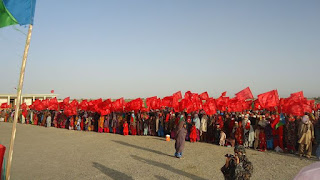 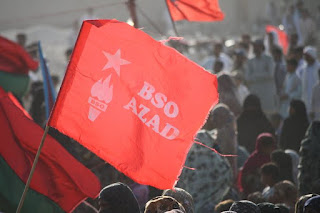 Why Politics is Necessary for Students?

Human being needs unlimited things for living besides oxygen and light, and those things are directly linked with human society. One person alone neither can fulfill the basic requirements of life nor can he/she live alone in a society. In this regard, human beings need a family, group or a society. Fulfillment of life’s needs gives birth to the idea of collective thinking; the achievement of collective interests on the basis of collective thinking is called politics.

In the history of different eras, the procedure and the basic structure of politics had been changed according to the need of the hour. Human beings had been doing politics on the basis of different political procedures in order to fulfill the needs of the family, any group, tribe, state and an empire, and there was one thing common in this whole struggle; that is the achievement of collective interests. There are two aspects of politics, Students Politics and Mass Politics, which are very important in modern history. Students’ politics had been a very effective motive for the Mass Politics in the history of modern world as youth is the factor of rising and fall of nations.

Why politics is necessary for us as Baloch students? The politics is necessary for us as Baloch students because we are living on Baloch homeland for thousands of years; as a nation along with collective discipline; similar living patterns and mutual respect. Our ancestors had scarificed their lives for the defense of the homeland and collective interests against colonialists and occupants. On the basis of collective thinking, it had been a Baloch tradition that Baloch youth, elders and women had always given top priority to the national politics and responsibilities as compared to their personal wishes and life because as individuals, our interests and emotions are directly linked with Baloch society and homeland. Active role of students politics is inevitable in Baloch national politics for the defense of Baloch national interests, history and geography; development of language and culture; provision of all basic needs of life and end of economic backwardness on Baloch homeland. The Baloch students' struggle had always been motivating all the aspects of Baloch society. Baloch students are embattled against any threat to Baloch national interests from the beginning of Baloch students’ politics in Baloch political history.

The political activism of Baloch students' had always been an issue for the occupants and their puppets. So for that, the occupants and their puppets under deliberate planning had used different tactics for separating Baloch students from political activities in order to depoliticize the students that they would withdraw from their national struggle.

The occupant has imposed unannounced ban on books in Balochistan, and students’ politics is prohibited in all educational institutions of Balochistan. Baloch students are fully aware about the current political condition of Balochistan, the barbaric genocide of Baloch nation in all over Balochistan by different strategies of occupant, Pakistan, the mutilation of Baloch history, geography, language and culture and deliberate economic backwardness.

As a Baloch student, if we wish that Baloch nation should be remembered with good words in the world history, and if we think that failure in achievement of Baloch national interests is an issue of national survival. So it will be our national duty to put aside our all personal wishes and accelerate student politics in entire Balochistan because as individuals, our survival and downfall is linked with survival and fall of the nation.